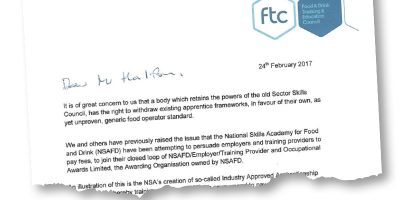 The UK’s food and drink apprenticeship frameworks could be discontinued, FE Week has learned. The Skills Funding Agency is currently deciding on which frameworks it will discontinue from April 2018, but because the new food and drink standards are not yet ready, it hasn’t put them up for consideration. However, the National Skills Academy for Food and Drink, which still has powers as an issuing authority left over from a previous incarnation, is running its own consultation on whether or not to cancel the frameworks it administers – raising the real possibility that learners might not have access to certain pathways for a year or more. The NSAFD used to be a sector skills council, and is understood to have the power to switch frameworks off without input from the Department for Education, a reality the DfE has now confirmed. The news has sparked major concern across the food and drink industry. In a letter to apprenticeships and skills minister Robert Halfon, seen by FE Week (below), Bill Jermey (pictured), chair of the Food and Drink Training and Education Council (FTC), wrote: “We naturally assumed the government’s own SFA/IfA had the final say on framework withdrawals, but we are astonished to discover the NSAFD still retains the ‘issuing authority’ powers of the defunct SSC to terminate frameworks at their will.” Read more...