Home : : News : : You need to be in it to win it! How apprentices can get ahead in butchery 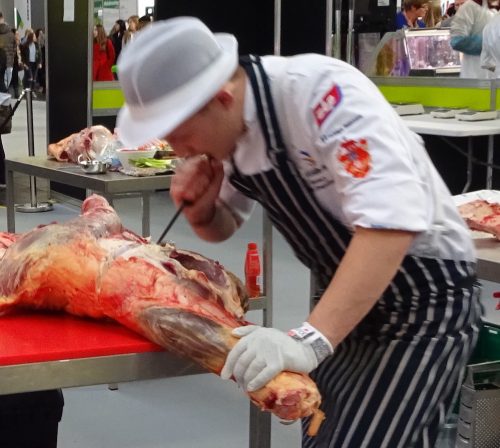 You need to be in it to win it! How apprentices can get ahead in butchery

Institute of Meat Chief Executive, Keith Fisher, on how your apprentice can get ahead in Butchery Having worked in the meat trade for almost half a century people often ask how I stay so motivated and interested in the business. That’s an easy question to answer – “ .” We are a nation of meat eaters, but our tastes are constantly changing. It’s our job as butchers to keep pace with those changes and ensure the products we develop are what our customers want to buy. That means innovation. Not only do we need butchers with first-class knife skills to drive our industry forward; we need creative butchers too. In butchery there’s no shortage of opportunities for keen young butchers to showcase their ideas and skills. Competing in butchery competitions is a sure-fire way of progressing to the very top of your profession; of making a name not only for yourself but for the businesses you work in as well. And you don’t need to be an experienced butcher to take part. We’ve had apprentice butchers as young as seventeen competing. Here are a few of my favourite events: Premier Young Butcher The Premier Young Butcher Competition (PYB) is owned and run by the National Federation of Meat and Food Traders (NFMFT) and is aimed at butchers under the age of 23 at the time of the competition. The competition usually takes place at a trade exhibition and so can attract lots of attention. This year it was at Foodex, in the NEC, Birmingham in April. Here, young butchers will have an entire day to flex their creative muscle in many categories, including: This is a fantastic first opportunity for young people within the industry to take the first step on the competitive ladder. Many previous entrants have gone on to take part in the International Young Butchers' Competition and the Butchery WorldSkills UK Competition. International Young Butchers Competition (IYBC) The IYBC is an annual European competition run by the International Butchers’ Confederation, based in Brussels. The competition spans two days at the host country, which varies year to year. The disciplines are very similar to those of the PYB; which in many ways is used to nurture competitors for the IYBC. This year the competition took place in Paris in February. Several teams, consisting of two craft butchers aged up to 25 years old compete for the team prize and the ‘International Young Butcher’ title. The competition categories include: Butchery WorldSkills (UK) Competition The Butchery WorldSkills competition has been designed to promote standards and raise the benchmark of craft skills across the industry, developing competence into excellence. It focuses on all skills required for a successful career as a multi-skilled butcher within the food manufacturing industry. There are opportunities for competitors to compete locally, regionally and nationwide across the UK in both the heats and the final round. At these events competitors will undertake a number of practice activities based on everyday work tasks. The competitions test overall skill, innovation, creativity, presentation, work ethic, method and approach to tasks; as well as carcass/primal utilisation, waste, and safe, hygienic working practices.? ?The final consists of five tasks, over the duration of two days and judged in front of a live audience at the Skills Show at the NEC Birmingham on 15-17 November. Competitors for the competition do not need any previous qualifications to enter. However, entrants must not have more than 10 years working experience nor have completed a level 4 or higher in Food Manufacturing Excellence qualification (or equivalent) to be eligible. World Butchers Challenge (WBC) The World Butchers Challenge began back in 2011 as a competition between Australia and New Zealand. The UK entered the fray for the first time in 2013 with what became the ‘British Beefeaters’ team. This year will be the Beefeaters fifth year competing, in what is now a mammoth bi-annual butchery competition, attracting teams from 12 countries around the globe. The British team consists of six butchers from all around Britain. For them, this is the ultimate competition. Most have competed regularly before, some as far afield as Australia! This year the competition takes place at the Titanic Exhibition Centre in Belfast on 21 March. Here, teams will each be allowed 3 hours 15 minutes to break down a side of pork, beef, a whole lamb and five chickens into a creative display of finished cuts and value-added products. Extra marks are given for complete carcass utilisation. The experience and confidence gained from taking part in competitions such as the WBC has enabled many young butchers to go on to run their own successful butchery businesses. Others find themselves in demand to represent the shop they work in at product demonstrations and butchery talks. Without exception, all have made new friendships and returned to work full of new ideas to delight their employers and customers alike. So, what are you waiting for? For more information on any of the competitions mentioned, either visit the relevant websites or email