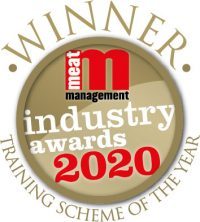 According to Meat Management the awards, ‘recognise the best manufacturers and producers, suppliers, retailers and organisations in the UK meat industry.’

The winners are the result of nominations from throughout the industry and meat sector experts. Commenting on the win, ftc Chairman, Bill Jermey said,

“We’re immensely proud of the butcher trailblazer apprenticeship, which we developed in conjunction with butchery employers large and small. Winning Training Scheme of the Year for the second time, as voted for by our peers and industry experts is a very satisfying endorsement indeed.”

Ftc would like to congratulate all their fellow award winners and thank Meat Management for running such an innovative and successful awards event.